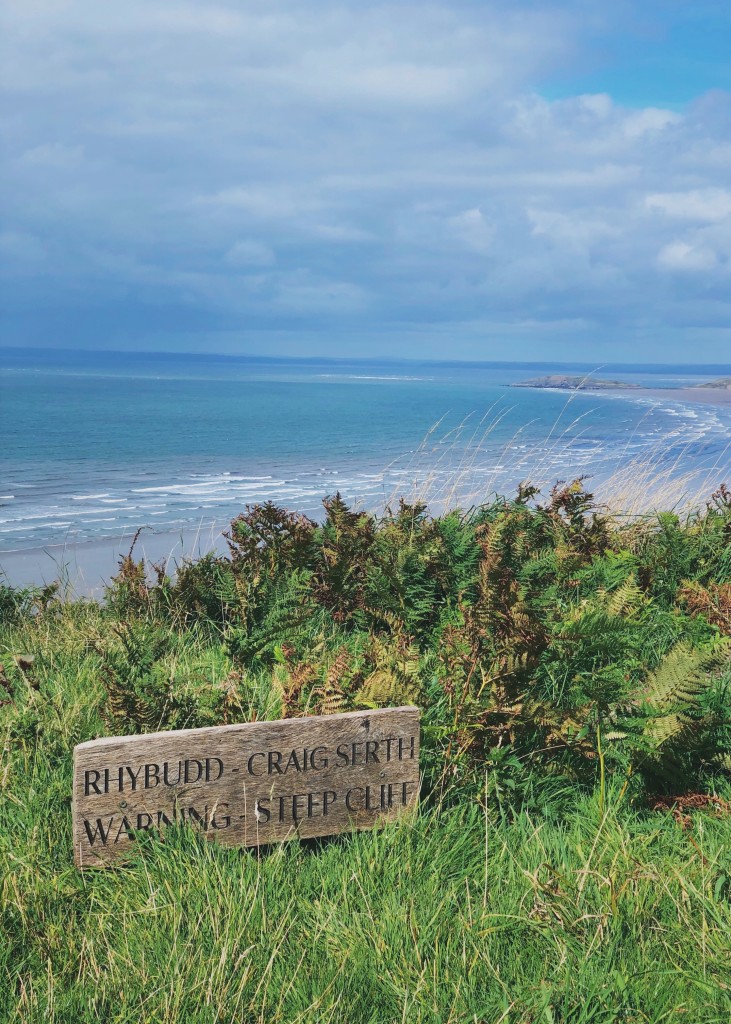 You’d probably expect one of the world’s best beaches to be in the Caribbean, Thailand or maybe even somewhere hot and sunny in Europe. But guess what, a humble beach on the shores of none other than Wales has made waves in the world of beach admirers. Yes, the coastline I’m headed to on my next trip is in Wales. Read on to find out exactly where it’s located.

Last year, I visited Bonnie Scotland for the first time. And I wasn’t disappointed. In fact, I find myself wanting to book another trip there. But getting the train to Edinburgh with two huskies and a four-month-old baby doesn’t sound very relaxing. Plus, as much as it’s nice to go back to places you know, I do try to venture to new lands wherever possible. And the ‘new lands’ I’m going to explore next? Wales.

I’ve been to Wales a few times. Probably the most notable trip was to Anglesey where we stayed in a friend’s holiday home, right near Trearddur Bay. Did I enjoy the trip? Yes. Did it blow me away? Perhaps not.

The combination of the rugged coastline with jagged rocks and rolling countryside was pleasant. It’s also handy that you’re within reaching distance of tourist attractions like Snowdonia, South Stack Lighthouse and Beaumaris Castle.

But after falling in love with Scotland, I want to find a part of Wales that appeals to me. And I think I might have found the spot. Strangely enough, I heard about this holiday destination on LinkedIn. Someone I was messaging suggested it. They said they went on a recent trip to Rhossili Bay and they couldn’t recommend it enough. Rhossili Bay is located on the Gower peninsula, around 20 miles from Swansea. So I did a quick Google, and discovered that Rhossili Bay has been named the best beach in Europe, and it’s also listed in the top ten beaches in the world. It’s up there with the likes of pristine beaches in Bali and Thailand. How can a humble beach, in Wales of places, gain such notoriety?

Well, it’s not because it’s a haven for sunbathers. That’s not really where the appeal lies. Rhossili Bay is so spectacular not because it’s the perfect spot to put up a sunbed and soak up some vitamin D – it’s because it is one of nature’s unspoiled wonders. This magical three-mile stretch of sand boasts awe-inspiring views. And if you time it right, you can spot the remains of a shipwreck at low tide. Read all about the story behind this shipwreck here.

A glance through the posts on Instagram under #rhossilibay will produce numerous impressive shots of this beautiful beach. Lots of people head there to get an iconic shot from above with the bay sweeping across the background. There’s also an abundance of sunflowers in the summer, creating unbelievable photo opportunities for visitors. The best time to visit the field of sunflowers is in July and August. However, we’re not visiting in the summer. We are going in mid-March. Yes, I agree. It is an exceptionally odd time to go to a location with an amazing beach. I certainly won’t be sunning myself in a bikini on the shores! We’re going at this time of year for two simple reasons. 1) We kinda need a holiday now, we don’t want to wait until summer. 2) We’d prefer to enjoy the delights of this tourist spot without hoards of tourists. So we’re going out of season. Plus, if Rhossili Bay is as spectacular as it sounds, we’ll just head back there to enjoy it during spring or summer.

So what is there to do around Rhossili Bay? At a glance, some of the main things to do in the area include hikes and walking around places such as Worm’s Head. There’s watersports and coastal adventures of course – weather dependant. We’ll probably pay a visit to the National Trust Rhossili Shop & Visitor Centre. And I know the hubby will probably want to stop by Perriswood Archery & Falconry Centre.

Oh, and there seems to be quite a collection of castles nearby, including Weobley Castle, Stradey Castle and Pennard Castle. You can also venture further afield and check out some of the surrounding bays on the coastline such as Llangennith Beach, which is only 2.2. Miles away, and Three Cliffs Bay, which is around eight miles away. We’ll be wanting to check out the local pubs, restaurants and cafes. I’ll report back on these after our trip as I want to get some local recommendations.

You have a four-month-old baby, isn’t it too soon for a trip away?

Errrmm no. We realllyyyy want to go on our first family holiday. And we feel like now we’re getting into the swing of the whole parenting thing after the shock of having a newborn – we’re ready to tackle a little trip. It’s about a four-hour drive to where we are staying, so we’ll have to stop quite a few times for feeds and nappy changes, but we’ll get there somehow. I think it’s good to try and get out of your comfort zone. Settling our little girl in a new place might be a bit of a challenge on the first night, but we’ll manage. I’ll let you know how it all goes and write a follow-up blog post about our first trip with a baby. We want to drive to France in the summer with the baby, so this will be a good test to see how we get on.

Keep an eye out for my verdict on Rhossili Bay. When I return, I’ll discuss whether it really does live up to the hype and whether I think it’s worth a visit. Plus, I’ll include lots of handy info and a brief travel guide based on the experiences we have.