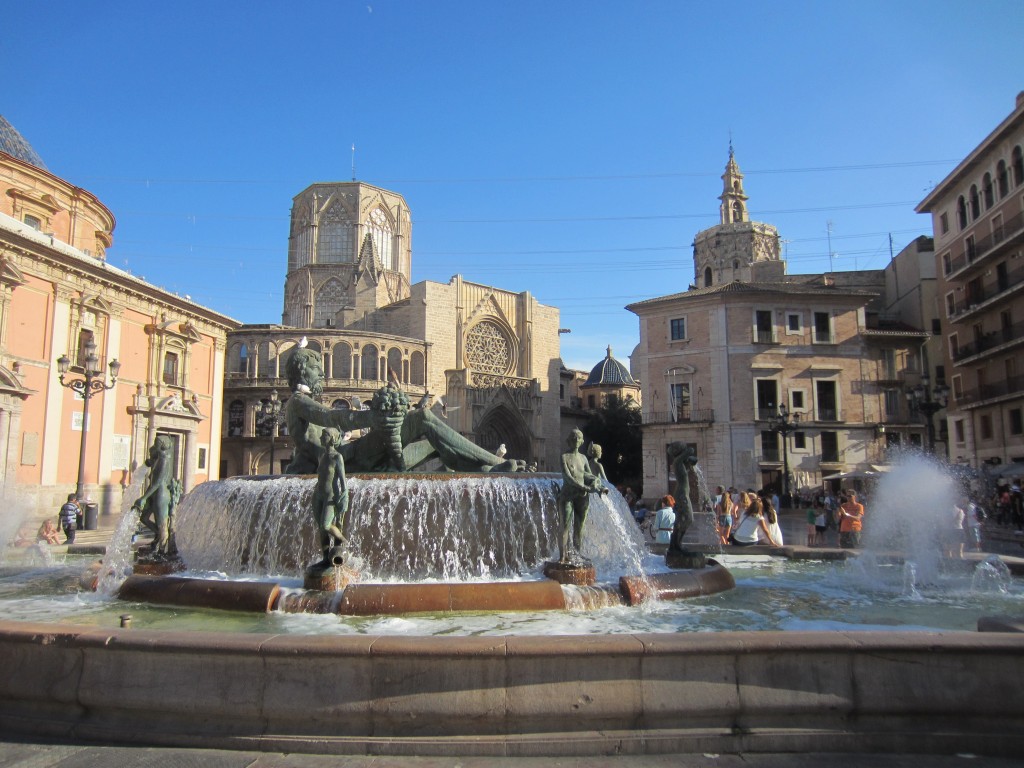 I have just returned from our fifth (I think) girls’ holiday. It’s always hard choosing where to go each year, and thankfully this year we made an excellent choice. Valencia ended up being perfectly suited to our needs, and we had lovely time.

The city somehow managed to blend old and new effortlessly. The impressive architecture of both the historic buildings in the old town, and the futuristic looking buildings in the modern science park provided some perfect photo ops.

There’s a plentiful supply of restaurants hidden mostly on the narrow streets of the old town. You have to venture onto the side streets and away from the square to stumble upon some of the city’s best restaurants.

When we were in the taxi from the airport, on approach, Valencia seemed like any other Spanish city. The outskirts didn’t look that impressive, and as we ventured further into the city I wondered whether we would be disappointed.

The taxi dropped us off in the old town where we were staying, and I immediately felt positive about our trip. We weren’t dropped outside our door, as a lot of the old town isn’t accessible by car, so we ended up trying to find out apartment on what seemed like the world’s shortest street.

We met our Airbnb host and she showed us round our apartment. We stayed in cute two bed apartment with an adorable balcony overlooking the streets of the old town. It was ideal for what we needed, and we later discovered, in a very convenient location.

You can walk to most places in the city, although our estimated 20 minute walk to the science park took about an hour. We also paid about 8 Euros to use the tram system which takes you to some of the key sights, but most importantly, the beaches. Taxis also aren’t too pricey if you want to do short trips.

A little word of advice if you are visiting Valencia, the locals don’t speak much English. We were surprised at how little English people spoke, and we struggled to communicate! The taxi drivers and waiters often don’t speak any English, so you may want to learn a few Spanish phrases.

We thought maybe it was because Valencia wasn’t as touristy as many other Spanish cities such as Barcelona, so not as many of the locals need to speak English.

Overall it was a charming city with striking architecture and character features. We loved that there were so many restaurants to choose from, relaxing places to have a few drinks and also plenty to see and do. You can probably see everything Valencia has to offer in about three of four days, but we found six days was the perfect amount of time for us.

I would definitely recommend Valencia as a girls’ holiday destination. It has all the ingredients you need, including bars, restaurants, activities and beaches. We particularly enjoyed the Sangria and Paella (which the city is famous for).

Here’s some of the main things we did on our 2016 girls’ holiday in Valencia. I have never been on a cycling tour and not enjoyed it, and Valencia was no exception. We went on a ‘free’ cycling tour where you hire bikes for £2 Euros and then tip the tour guide.

The bike tour lasted two hours and it took us to see all the main sights. They had an odd motto on a sign outside the bike shop, titled ‘put the fun between your legs’. I don’t know if that happened but we certainly enjoyed the cycling tour.

The guide providing some interesting historical facts and information about the city and its buildings. I would recommend going on a cycling tour on the first day of a trip, as it’s an excellent way to get your bearings and decide which places you want to visit. I love buying fresh products from local markets. We stopped by Mercado Central to pick up some bits for breakfast and lunch, and we weren’t disappointed.

It’s Spain’s biggest fresh food market and the largest and oldest running food market in Europe. The building itself is very impressive, especially the roof. Here you can get fresh fruit, veg, meat and spices to make Paella. Sadly we only discovered the Marina Beach Club the day before we we due to go home. We stumbled upon it whilst walking from the Marina to the beach, and peered in enviously at the beach club guests inside.

We decided it was worth doing for our last day as a treat, and hoped they could fit us in. Thankfully they could, and we found it hard to play it cool and hide the excitement on our faces. Our apartment didn’t have a pool, and we hadn’t had sunbeds all week, so we were looking forward to some luxury.

Now 50 Euros for a day at a beach club might seem quite expensive, but that also gets you 35 Euros worth of food and drink. This meant we could have lunch and dinner before our flight, and even treat ourselves to some Sangria too.

The beach bar had comfy sunbeds, cool little pods, an infinity pool overlooking the beach and sea, and several bars. It was the perfect way to end our holiday. We decided to venture out of the city to Albufera National Park, which sounding like a worthwhile place to visit. It took about 20 minutes to get there in the taxi which costs us 20 Euros.

The taxi driver just dropped us off at some random part of the park (he didn’t speak English), and from there we had to figure out what to do. We walked down to Albufera lake, which although is enormous, didn’t look that impressive.

We decided to go on a boat trip around the lake to get our bearings and have a look around. It lasted 45 minutes, and it was a tad uninspiring, especially as the tour guide was speaking in Spanish. Still, we had fun trying to guess what he was saying.

Next, we made an epic mistake. Instead of waiting half an hour for a bus to take us a to the beaches of Albufera, we decided to walk there instead. Someone from the boat company said it was about a ten minute walk to the beach. It took us an hour. Then we spent another hour walking along the beach in search of food, as it was well past lunch time.

We eventually got to a very nice Paella restaurant after asking about five lifeguards how far the next restaurant was. I have to say the beaches here were stunning and far more attractive than Valencia beach, which is very crowded. If it didn’t cost 40 Euros to get there and back we would have come back another day. I would say Paella is in my top five favourite dishes, so I was thrilled to visit a city that’s famous for it. In Valencia, the Paella is a little different to what I’m used to. Instead of seafood (although you can order a seafood Paella if you wish) the traditional recipe is made with chicken, rabbit, and, get this…snails!

We asked for ours without snails, although I think they are mainly used to add flavour. Keep in mind you usually have to share Paella between at least two people, and it takes bloody ages to arrive.

If I’m honest, despite the Paellas in Valencia being very tasty and packed full of flavour, I do still prefer a seafood Paella. The best place I have ever had Paella is in a restaurant called Salinas in L’estartit. We decided we wanted to go to the Aquarium in the Science Park. After estimating it would take us about 20 minutes to walk there, it ended up taking an hour. By the time we got there it was too late to go in the Aquarium (it was a Sunday and it closes around 1pm).

So we ended up just strolling round the Science Park and taking some snaps of the striking buildings instead. There’s also a Science Museum and Planetarium there.

So that’s it for another year. I wonder where we will end up next year? Apparently Lisbon is on the cards. We shall see. Here’s a video of our trip and a few more photos….