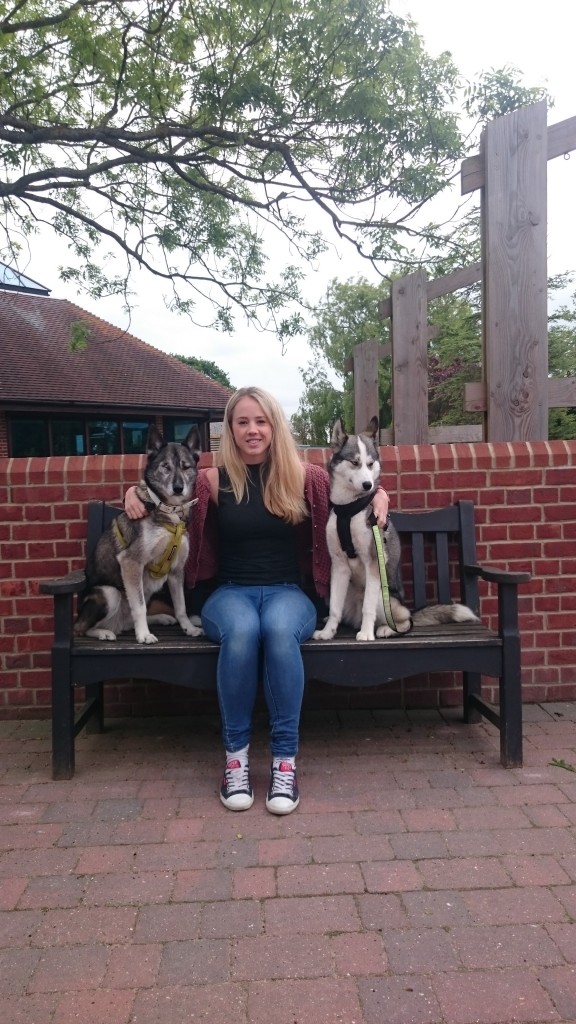 I have some more exciting news, I have adopted another wolf (a husky to be exact). I have been nagging my other half to get another dog for about two years now. Pretty much every day I would post a picture of the most adorable rescue dog I could find, hoping that he might be tempted.

It obviously wasn’t the right time for us to get another dog, we had to wait for things to fall into place. Now is most definitely the right time, and I have a heart-warming little story to tell.

We have another rescue dog, Orla, the husky collie cross who we adopted three years ago. She’s a pretty special dog, and she also helped inspire my business name. Sadly, we got the heart-breaking news a year ago that she has canine glaucoma, and will eventually lose both her eyes (she’s only four). Currently, she has one eye left, and the other is rapidly deteriorating.

When she got diagnosed the vet initially said having another dog around to help her through the process of going blind would be beneficial. When she said this I was like, ‘can you just say that again so that I can record it and play it back to my boyfriend?!’ Still, it wasn’t the right time, she still had her sight and we weren’t in the right place in our lives to take on another dog.

Then, after having her first eye removed, we had some more bad news. I thought her remaining eye was doing OK, so it was a shock when they took the pressure and it was very high (to read more about canine glaucoma and Orla’s story click here). The vet said she will lose her sight soon, and we don’t know exactly when. It could be a week, it could be a month, or if we are lucky, a year.

She said if you are going to get another dog, you need to do it now, before she loses her sight. Obviously you can still introduce a new dog to a blind dog, but it’s definitely not very easy and poses more challenges. That was the news we needed to at least trial having another dog. However, with Orla’s condition, finding the right dog wasn’t going to be easy.

We needed a pooch that would play and interact with Orla nicely, but be respectful when she needs space. Plus we wanted a smart dog that might one day be able to act as her guide dog in some way. And on top of all this we naturally wanted a dog that we both really like. There were lots of boxes to tick.

We tried two dogs before we found Rav, and for some reason they just weren’t the right fit for our girl, or us. Thankfully we worked with very understanding rescue centres who knew our situation.

Orla was from Raystede, they are a fantastic animal rescue centre, and they know her history, so we were hoping to adopt from there again if the right dog came up. Then along came Rav. I wasn’t originally going to consider a husky because we felt they would be too big for our home. However, I was told that Rav is pretty small, and probably won’t get over 20kgs (our girl is about 21).

So we went along to the centre to meet him and I was surprised at how little he was. He was extremely underweight (just 13 kilograms bless him) and was suffering with tummy issues. An 8 month old pup like that just shouldn’t have to be in kennels.

He was very timid at first, and we suspect he has been ill-treated in the past. He didn’t really interact with us much, but when we put him in the pen to play with Orla (after going for an introductory walk), they had an absolute blast. My partner and I instantly fell in love with him and knew we could give him a happy life. It was just up to Orla to decide whether he could stay with us or not. So we took him on a two week trial.

It wasn’t easy trying to introduce a new dog into the home. Orla is quite territorial and a strong female, so she wasn’t about to let some young lad take over her home.

The first week was tense with Orla being snappy and not enjoying someone on her turf. However, as time went by she started to accept him and even play with him. He was very respectful when she asked him to back off and would go and sit in the corner like a naughty child.

Now they seem to want to play every single morning, and also when I return home after leaving them. It’s wonderful seeing them interacting and Orla enjoying the company and companionship of another dog. I was initially facing a tough decision not knowing whether she would come around, even if having another dog was better for her in the long run.

I also had to introduce Rav to my mum’s dog Kaspur, who I helped rescue when I was living at home. Turns out Kaspur wasn’t that bothered by Rav’s presence and the three of them are fine together. Happy days.

So I’m officially welcoming Rav to the pack. He will appear with Orla on my Instagram account and I will document what will hopefully be a blossoming friendship. I also hope that Rav will help Orla out when she loses her sight. Rav is so well behaved for only nine months old, and he’s an absolute cuddle monster who worms his way into your lap at every opportunity. I can’t believe how much he has changed and grown in confidence in a few short weeks. He used to shy away from people and now he can’t get enough attention.

I feel so lucky to have these two dogs in my life, and to be able to take on rescue dogs who are desperate for their forever home. I just couldn’t get a puppy knowing there are so many dogs out there who need a home. I’m so happy with my new wolfpack, aren’t they just gorgeous together?