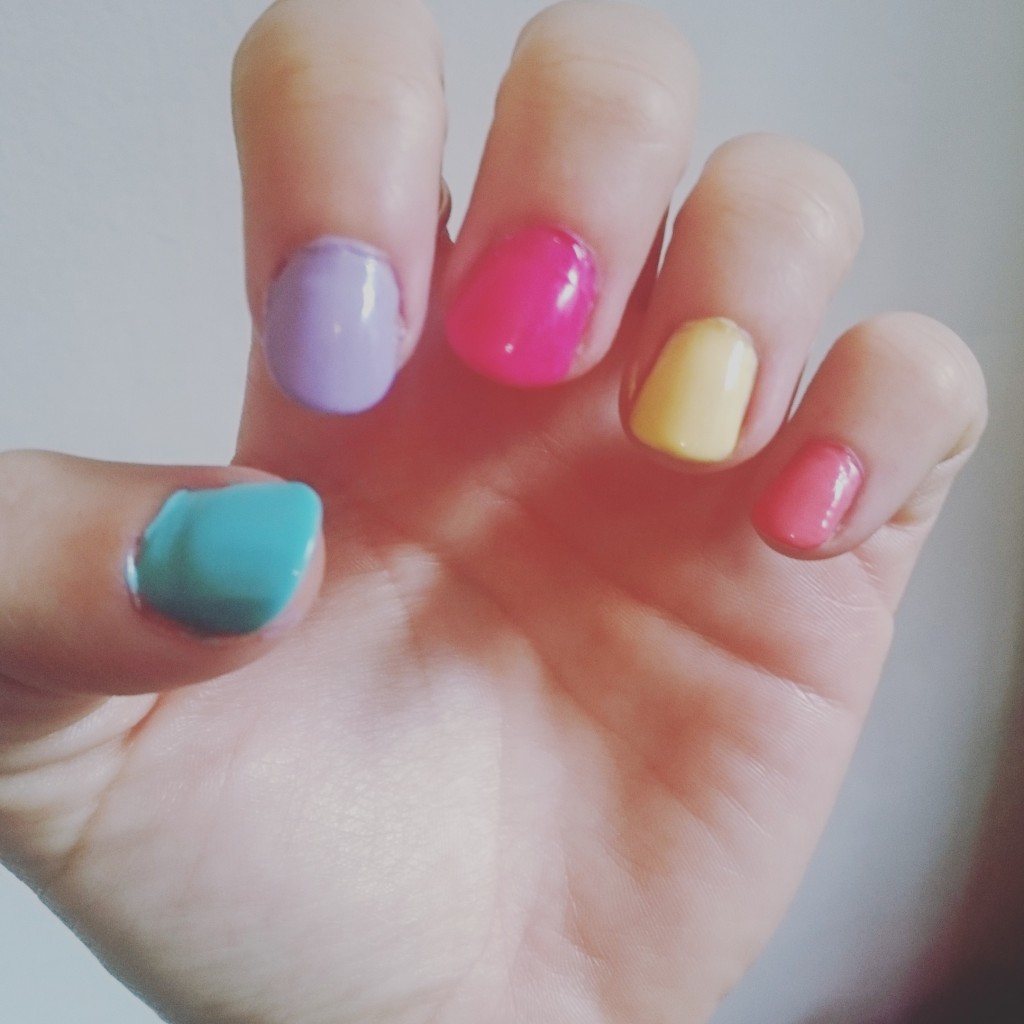 Tonight, we were browsing the rather dismal selection on Netflix (I know, how fussy are we these days, remember when we only had Blockbuster?), and we decided to watch ‘stranger than fiction’. In case you don’t know it, the main character suddenly starts hearing a voice in his head, and realises he’s part of a story.

And you know what, somewhat unsurprisingly it has awakened my writing spirit. We only got half way through. The fiance went to bed, and I stayed up watching Mad Men. But for some reason I could not concentrate one bit. I was not getting the normal satisfaction of a good ol Netflix binge. No sir.

My brain started sending signals to my fingers saying ‘you must start typing now.

I tried to ignore the pesky thoughts and ideas running through my head, like messages flashing up on a billboard. But the writing disease persisted.

I guess it’s a bit like an addiction, and it can strike at any time. So I found myself, in an almost zombie/robot like fashion, going upstairs to grab my laptop. I felt the pull. I knew I had ideas in my head and they weren’t going to go away or leave me to sleep soundly until directed onto an electronic piece of paper (aka my laptop).

I even waited ten excruciating minutes for my shitty bloody laptop to start up and stop loading. Stupid piece of crap. Do you know how annoying it is when you have an urgent need to write and get an idea down, and you’ve got no where to channel your writing energy?

Different thoughts kept whirling around my head like a tornado, with me desperately trying to grab some of the pieces to salvage them.

Writers get ideas regularly for sure, but they come and go in an instant. If you don’t do something with them or write them down they get lost in the depths of time. You might be able to recall them later but they won’t be half as good for some annoying reason. It’s now or never.

My eager hands were getting so frustrated that I started tapping furiously at my keyboard, as if the words would magically arise onto a still dark, switched off screen. Once finally on my laptop I didn’t even bother to open the correct folder in my Google docs, the one titled ‘Kiri blog articles’, and I freestyled it. I opened a document there and then, risking losing it in my database, but simply happy that I could begin plucking my thoughts from my mind and getting them into a shiny white blank page. Come to mumma.

And this leads me to the present. I’m slumped on the sofa, still in my low cut maxi dress I went to dinner in with the two pooches snoozing peacefully beside me. A moment of complete calm, and an opportunity, after a long week of writing articles for everyone else, to write something for myself.

Being a writer really is a funny thing. It’s such an odd existence, one that’s often quite overwhelming. But it’s also fascinating and filled with intrigue.

After spending most of my life not really understanding what my purpose was, it’s a relief to finally comprehend my true calling. Because that’s what it is, a calling. It’s who I am. I’m a writer. It doesn’t matter whether anyone loves my work, it’s what I’m compelled to do. It’s what makes me happy.

Writing gives me a buzz like no other, except maybe food and sex obviously. Although if I get a really good idea on the other hand, and write something I’m exceptionally impressed with, then that’s another story (literally).

Let me tell you a bit about what it’s really like to be a writer. In a way, I feel like I’m another species of human. In my day to day life, I don’t come across many people who think and behave like me. But that’s probably because I’ve not met many writers.

Yo wordsmiths out there, fancy meeting for a coffee to discuss our weird habits? Hook a gal up will ya.

None of my friends have experiences where they are going about their day, and the words of a story or an idea for an epic blog post pops into their head. That’s what happens. I will be in the pool swimming or out on a run, and then boom, that’s when the best darn ideas hit me like a ton of bricks. And I’m like, oh hey there awesome idea, could you just hang in there until I get home, because I’ve got no way of writing anything right now. Unless when on a run I grab the nearest stick and try and carve my thoughts into the dirt, which, is less than ideal.

Being a writer is quite a solitary existance. I spend most of my week alone. The most interaction I get is with dog walkers and the staff in the coffee shops. It can also draw you away from those you love.

Even if you want to spend time with your loved ones, if the writing voice calls, you have to answer. There’s nothing else to it.

The thing is, I don’t mind this solitary life, in fact, I bloody love it. People say to me, ‘don’t you get lonely’. I just say ‘yeah sometimes’ because I think that’s what I’m supposed to say so I sound socially normal. When in reality, I love nothing more than not speaking to anyone for days and losing myself completely in my writing.

I’ve also noticed another ‘writerism’ I do lately, and it makes me look like a right weirdo. So I will be talking to someone, or in the same room as someone, and staring them directly in the face. They think I’m looking at them and taking in my surroundings, when really I’m not. I’ve left planet earth for a good few seconds, just long enough to process an intriguing idea or concept. When they realise I’ve got no clue what’s going on they think I’m just a little bit insane, but aren’t all writers just a little bit odd?

The most annoying writer moments are times like now, when all I want to do is relax. I want to mindlessly watch four or five episode of Man Men without having a single thought about writing. Some days, the days where I’m not geared up to write any genius copy, I do get a chance to switch off.

But not tonight. Even when I was trying to ignore the writing voices in my head, I knew damn well that I wasn’t going to bed without extracting these thoughts from my head somehow, even if it meant I had to wait an excruciating amount of time for my laptop to decide to work.

I would compare the urge to write to being in the zones of The Hunger Games.

You know when they are in the different zones. Each zone brings something different, some bring danger, and others bring nothing at all. Every day and every hour is different. I spend my life walking through these zones. And it totally depends on whether I’m in the dangerous mist zone or the fire zone as to what I end up writing, or whether I write at all. There’s not much control over what you write, and when you write it.

It’s not a skill you can just call upon 24/7. You can’t be like, hey brain, I need to write a wonderful blog post about how to be happy in three easy steps in the next hour. Coz every now and then your pesky brain will be like nope, dream on sista. You’re not writing shit today. Arghh, it can be super frustrating. I believe what I’m really describing here is writer’s block.

I think writer’s block is a bit misinterpreted in the media. In the film ‘Stranger Than Fiction’, the writer gets writer’s block. It’s portrayed as something that halts your writing completely. But in reality it’s not as black and white as that. There are times when I struggle to form words, but that doesn’t mean I can’t produce any words at all.

It’s more like a writer’s dip, than a block.

Think peaks and troughs. It’s just that often when you are in the troughs, it’s usually wise to walk away and revisit your work another time. Because if you don’t it’s likely you’ll produce utter crap.

Anyway, I seem to be waffling on as usual, which is what I do on a daily basis, both with my fingers when I type and my voice when I speak. But tonight I’m not writing to captivate an audience, I’m writing to help curb an addiction. I needed to get my fix, and so I’ve produced this blog post. So if you have read this, well done you, and thank you, you’ve served a purpose.

I’m pretty sure I’m going to come up with a genius idea for a novel tonight, so I’m off now. I’m going to open another Google Doc and jot down some cray cray ideas for stories. Peace out my lovelies. After that I’m hoping to be able to watch Mad Men without any distractions. I want to be Betty Draper for one evening please, is that too much to ask oh wise God of writing???