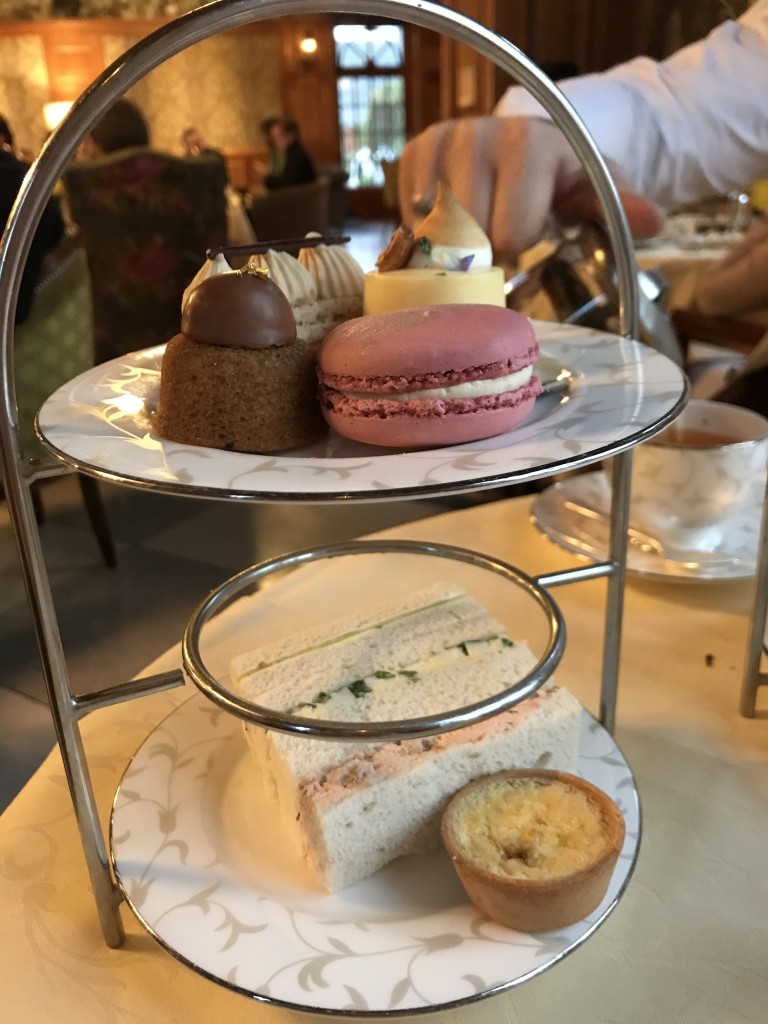 My lovely hubby booked afternoon tea at Pennyhill Park for my birthday. My parents actually got married at Pennyhill Park back in the day, and I think he thought it would be nice for us to go there for a little treat. It’s a very upmarket hotel complete with a rather lavish spa. I’ve been to the spa before and I have to say it is a league above most hotel spas. But sadly it’s a tad out of my price range these days. Anyway, onto the afternoon tea review. Now considering it costs £40, I expected it to be pretty darn exceptional. Most afternoon teas come in at around £25 which I feel is a lot more reasonable for some sandwiches and cakes. The best afternoon I’ve been to in the UK so far has to be Coworth Park in Berkshire, and honestly, it really was amazing. Such a lovely venue and the sitting room is beautiful. You can read my review of Coworth Park here.

Pennyhill Park is set in picturesque surroundings and impressive grounds. We had a little stroll round the hotel prior to dining and I tried to picture what it would have been like for my parents when they got married. The afternoon tea is held in a rather grand room. The decor is absolutely stunning and the view over the pool and spa is relaxing. But to me, as nice as it was, the room felt a little bit too dark. I have to say to be fair, the service was as expected. The staff were very professional and attentive, and the chef even came out to explain the pastries and sweet treats we had. I had a gluten-free option. Whenever I have afternoon tea, I kind of expect to be wowed by the presentation. I hope for a pretty collection of cakes to come out looking extremely enticing. And, well, when we got ours I couldn’t help but feel a little underwhelmed. Sure, it looked nice enough, but it didn’t make me get serious food excitement.

The scones were OK, although I had gluten free ones and they tend to taste a bit dry anyway. The cakes tasted alright too. I had some eclair type thing which was actually really tasty. And the macaroon melted in my mouth. My favourite aspect of the whole experience was when they bought out the palate cleanser because it was so delicious and refreshing. Another thing you expect with afternoon tea is to have a good selection of, well, tea. I think other places I’ve been have offered up far more interesting teas and also a wider choice. There weren’t many caffeine free options either. Plus the sandwiches were pretty average. We had salmon, egg and cress and cucumber and cream cheese. They did however offer more sandwiches which the hubby appreciated.

I went for the ceylon tea and the hubby went for vanilla rooibos (one of my personal faves). I did really enjoy my tea and they came round and asked if we wanted more. After we left we both decided we were just a tad disappointed. I can’t say why exactly, I just expected more of a place like this. And I came away frustrated we’d wasted £40 each when we could have had a very nice meal out somewhere for that.

Personally, I wouldn’t recommend going. I think Pennyhill Park need to step up their game if they want to compete with other high-end afternoon tea venues. But to be fair I think most of the appeal is simply having tea in a place like Pennyhill Park because it feels very exclusive, and that’s why people pay for and probably enjoy it. But I won’t be going back again myself.