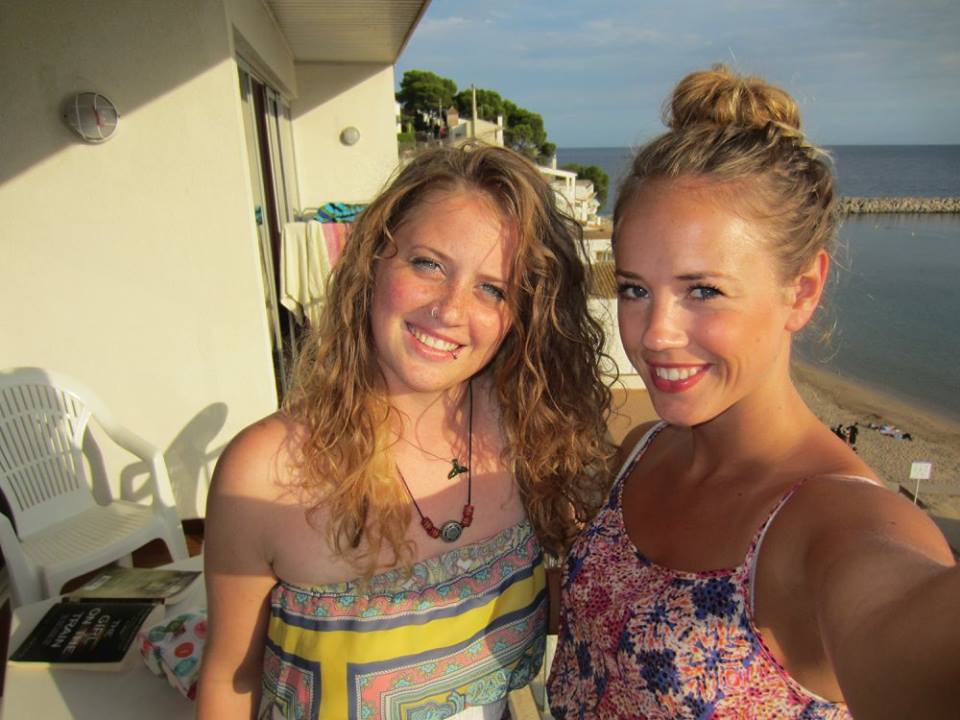 Once upon a time there were two sisters. When they were little girls, they used to play together (and fight) a lot, but they also showed early signs of having their own special interests. Kalina would put on her apron, grab a paint brush and splash paint all over her child-friendly easel. She would get paint all over her hands, face, hair and feet. After she finished painting she looked like a scary paint monster. Kiri would sit by herself, watching Kalina paint, and make up beautiful stories in her head. Instead of using her hands to be creative, Kiri would let her mind drift off into a make believe world. Sometimes she would grab a pen and scribble down poems and stories with dragons and unicorns. As Kiri and Kalina grew up, they continued to harness their individual gifts. Kalina, much to her parent’s frustration, decided to paint her bedroom walls herself. However, she didn’t select one subtle colour of paint, she covered her walls in a rainbow of paint. Her bedroom looked like the inside of an artists lair. She excelled in art at school, and started to draw sketches in a sketchbook. She wanted to be just like her daddy, who was a graphic designer, and had done many wonderful paintings.

Kiri excelled in English at school and when she wasn’t doing sport, she filled her time with words. She wrote a diary and continued to write poems. She did well at school, but in her school reports it was constantly mentioned that she ‘doesn’t always listen, and seems to be in her own little world.’ Well that was because she had lots of ideas in her head, and nowhere to channel them. She wanted to be just like her daddy, who had always had a way with words. Kiri had found a few of his letters and stories that he had written and thought maybe she could do the same.

Both sisters did well in sport, and competed internationally in a sport called Biathle. Kiri was better at running and Kalina was better at swimming. They grew up thinking that sport was their identity. They wanted to make their parents proud, and over the years, they were very successful in their sport. However, as they turned into adults, they both struggled to determine who they really were. Then one day their daddy fell ill. Kiri and Kalina thought their father would be OK and get better. Sadly, he died three months later. The two sisters were suddenly bound by grief, and the cruel realities of the world. At 15 and 18 year’s old, they were completely lost, and realised they had to figure our who they were, without their precious father, who had such a big impact on them.

Kiri, who was at university at the time, decided to carry on with her degree. She studied sociology, and was fascinated by human society, and how people behave around the world. She loved writing about social issues and challenging the way people see things. Despite obviously being in a lot of pain and suffering with grief, she graduated with a 2:1 in sociology.

Whilst she was at uni she started writing a book. She had no idea why she started or what the book was for, she just knew she wanted to write. Perhaps it was a constructive way of dealing with her grief. Then she graduated and had absolutely no idea what she wanted to do, other than she would enjoy something media related.

Kalina, who, as well as clearly loving art, developed a passion for all things surfing. She got through school and A-levels, suppressing her grief and hiding her pain. She got into kite-surfing and moved to Plymouth to study wildlife conservation at university. After graduating, Kalina was suddenly hit by her grief and depression took over. It was at this time that she resumed her passion for art, and started painting again.

Kiri ended up working in digital marketing for five years, and after becoming a content marketing manager, she finally realised she wanted to be a writer. She went freelance and started her own business. After three years she had successfully built her own copywriting business. She finished her novel, and began editing it, and started her own lifestyle and happiness blog. Kalina continued to paint and built up a magnificent collection of the most unusual and wonderful paintings you will ever see. She continued to battle with depression, and used her art as a way to escape the world. She set up her website and started promoting her art on social media, and researching the art world. Then one day someone noticed her art, someone from a gallery in Shoreditch. Kalina will be exhibiting her art in a few short weeks at the Brick Lane Gallery in London. Check out her website and follow her on Instagram.  Hopefully Kalina will get her break and begin to make an impact on the art world. So you see, both girls ended up getting a very special gift from their dad. Their father will live on through their work. If he was here, he’d be just a little bit proud. It’s fascinating reflecting on your childhood, and pinpointing things you did that have shaped who you are today.

A lot of people find it difficult to decide what to do in their career. Some people will question what to do, when the answer is hidden in their past. It often just takes a stroke of luck, a specific event or trial and error to find what you really love. The aim of this short story is to inspire people to do what they truly love, and to realise that happiness can come from heartbreak.