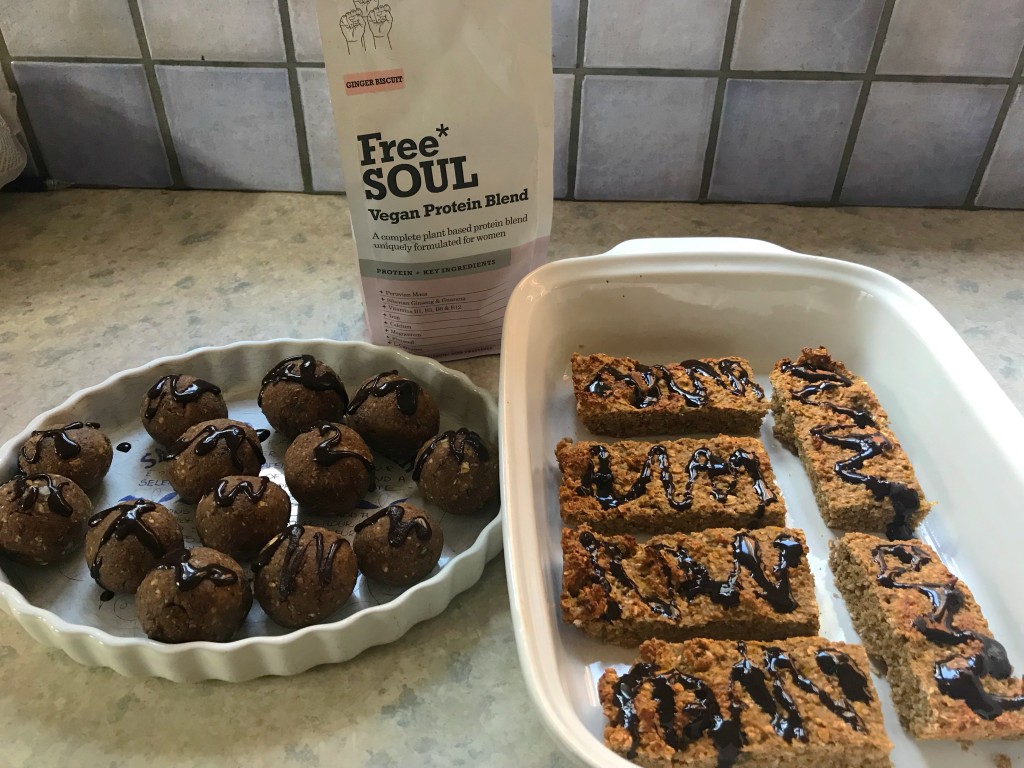 I’ve been trying to find ways to get in the Halloween spirit. But *spoiler* I don’t like scary movies, and no one wants to invite me to their Halloween party after I turned up as a yellow minion. We’re currently living at my mums to save for a house, so I don’t really feel like kitting out the place with millions of pumpkins.

My solution? If you can’t celebrate Halloween (because, sigh, adults don’t go trick or treating) and no one’s hosting an amazing shindig, you can at least fill your belly with goodness, right? So, this year, swap all those chocolates and sweets for a Halloween style snack that’s actually going to fill you up and offer some nutritional value.

I’ve also had my husband complaining that he doesn’t eat enough protein lately, and he keeps buying snacks at work. So I’m going to kill two birds with one stone. 1. Celebrate Halloween and 2. Increase my/our protein intake. Now, let me stress, I’m no baker. In fact, I’ve got a history of being pretty awful. Why? Because when I cook I’m not precise.

I like to be creative and experiment, chucking in a bit of something here and a dash of whatever takes my fancy.

Sometimes this strategy works, other times it doesn’t. But today whatever combo I threw into my mixing bowl produced a positively glorious result. Perhaps there’s room for me on an amateur bake off after all.

These may not be the prettiest sweet treats you’ve ever seen in your life – mainly because I couldn’t get the chocolate drizzle on point. But boy do they taste good. Both the protein balls with ginger and dates and pumpkin and cinnamon flapjacks feel like a mouthful of Halloween/autumnal goodness.

The protein balls were taken from a recipe by Amy Cousins which I’ve adapted using my usual experimental flair. The protein flapjacks are all my own making. I actually make these quite regularly for the hubby to take to work. They’re also great for breakfast with a helping of Greek yoghurt. We had a CrossFit competition a few weeks back and these babies got us through six hours of WOD’s (workouts). These flapjacks are different to my usual ones, because they’re made with pumpkin. Pumpkin??!!! Yes, I know it sounds strange, but trust me, it really works well for this recipe.

When Halloween is done, don’t throw your pumpkins away, use them to make soup, cakes and flapjacks.

I’ve been wanting to try protein balls for a while, having tried the Deliciously Ella cashew and ginger ones. They’re nice, but I find them a little hard going, and perhaps a bit to zingy for my liking. Plus they’re uber expensive. Then when I saw Amy’s recipe and tried her creations myself at a promo event – I knew I had to make some.

And guess what, protein energy balls are soooo easy to make. No cooking. A tiny amount of prep.

Sure, I made quite a mess, but I had great fun making these scrummy snacks. On a side note, I find cooking is a great distraction when you need to take your mind off things.

I like being creative and focussing my mind on the task at hand rather than the billion other things in my brain. There was something quite therapeutic about making these protein balls because you have to roll them individually with your hands. It reminded me of when I was little and I used to make little balls of sand, and throw them into the sea (I was a strange child).

As I mentioned earlier I don’t really measure exact amounts. I just add ingredients and have a quick taste to see if I need more. So use the ingredients below and make them your own – depending on what ingredients you like the most.